Eeek! Starstruck is finally here! This is the fourth novel in the Lovestruck series and I’ve had it planned for AGES. I can’t believe I finally get to share it with you!

I have those usual release day jitters! This time they’re even worse because I really love these characters so much and I hope everyone else does too! It was so much fun to write in the Lovestruck world but to focus on different characters. I particularly loved writing about Jackson from a different perspective. Sofie gets to know him in a way that Lizzie doesn’t so it was fun to explore his character more in depth. I really hope you all like it!

Here are the links: 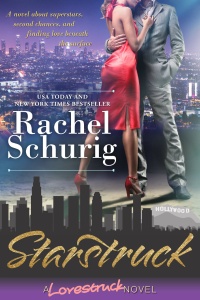 **The book has been published on Google Play but it is not live in the store yet. I will update here and on Facebook as soon as I have a link! Sorry for the delay.**

Here’s a little more detail about the new book:

Sofia Flores has had a crush on Jackson Coles for as long as she can remember. And she’s hardly the only one. After all, Jackson is one of the most famous movie stars in the entire world. Sofie never imagined she’d get any closer to her fantasy crush than admiring him on the big screen. Real life just doesn’t work that way.

But everything changes when her cousin Lizzie marries Jackson’s co-star, Thomas. Suddenly, Sofie finds herself actually meeting Jackson Coles, up close and personal. It’s every fan girl’s dream come true. And to Sofie’s shock, Jackson seems just as excited to spend time with her.

Despite Jackson’s attentions, Sofie knows that real life is rarely like the movies. Real life means struggling as a single mother, running out of money, and dealing with a loving but frustratingly obtrusive family. Not to mention the heaps of Baby Daddy Drama that continue to plague her…and threaten to take away the very thing she holds most dear in life. There’s simply no room in her life to go chasing after a movie star, even one as gorgeous as Jackson Coles.

But when Jackson shows that he’s more than willing to do the chasing, Sofie has a big decision to make. Will she play it safe? Or will she risk everything for the perfect Hollywood ending of her own?

Let me know what you think! xoxo

24 thoughts on “Starstruck is now available!”